Mind & Life emerged in 1987 from a meeting between Tenzin Gyatso, the 14th Dalai Lama; Adam Engle, a lawyer and entrepreneur; and Francisco Varela, a neuroscientist. While the trio understood that science had become the dominant framework for investigating the nature of reality—and the modern source for knowledge that could help improve the lives of humans and the planet—the three regarded this approach as incomplete. Whereas science relies on empiricism, technology, “objective” observation, and analysis, the Dalai Lama, Engle, and Varela were convinced that well-refined contemplative practices and introspective methods could, and should, be used as equal instruments of investigation—instruments that would give science a subtler and broader dimension, more connected with actual human experience.

Year after year scientists from different fields have engaged with the Dalai Lama in a dialogue between the third-person ‘objective’ methods of modern science, pioneered in the West over the last few centuries and the meticulous exploration of first-person ‘subjective’ experience developed for many hundreds of years in the contemplative traditions of the East.

In March this year Matthieu Ricard joined the Dalai Lama and 16 scholars and scientists for the 33rd Mind & Life Dialogue “Re-imagining Human Flourishing,” which focused on how to best prepare young people for their roles in a rapidly-changing world. Topics included social emotional learning in early childhood and in the classroom, innovative approaches for teaching compassion and ethics in schools, and methods for developing students’ social and emotional skills through focused attention and mindfulness training. 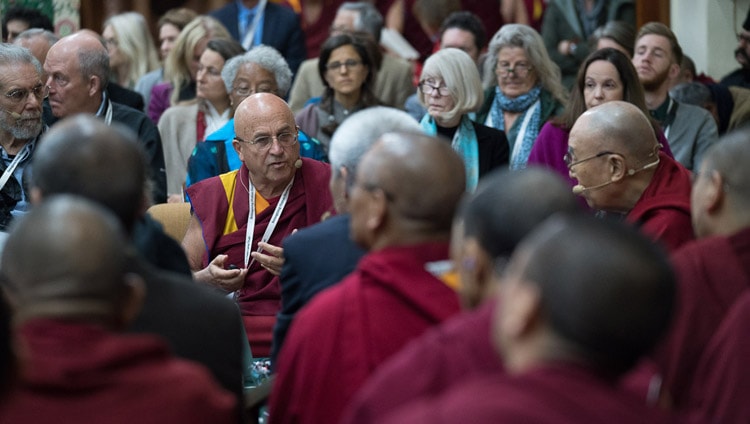 Matthieu Ricard discussing the role of compassion in secular ethics on March 15, 2018 at the Mind & Life Dialogue in Dharamsala. Photo by Tenzin Choejor.

I was fortunate to be involved in Mind & Life since 2000, when the groundbreaking meeting on ‟Dealing with Destructive Emotions” was held at His Holiness the Dalai Lama’s residence in Dharamsala, India. Since then, as a meditative subject, I spent dozen of hours in MRI scanners, at the labs of Richie Davidson, Antoine Lutz, Brent Field, and Tania Singer, and became a close friend and humble collaborator with many of the eminent scientists who participated in Mind & Life events, such as Paul Ekman, Wolf Singer, and Daniel Batson.

One of the greatest achievements of Mind & Life has been its yearly Summer Institute. For the last seven years it has attracted over a hundred young scientists from all over the world, senior researchers and Buddhist philosophers and practitioners who, over a week, explore a specific topic, in a format that combines scientific presentations, informal discussions, and periods of meditation practice culminating in a day of silence.

In August this year, at Matthieu’s suggestion, I had the privilege of participating in the Mind & Life Europe Summer Retreat Institute (ESRI) as a ‘contemplative fellow’ with American meditation instructor and author Elizabeth Mattis Namgyal. Elizabeth had just taken part in the US version of the Summer Retreat.

The venue was the Fraueninsel, on the Chiemsee, a beautiful lake in southern Germany. This is the ‘women’s island’, where a community of nuns has been praying daily in the same place for 900 years. Our host was Sister Scholastica, a Scottish nun of strong character who is familiar with meditation and encourages today’s busy people to give space for mindfulness in all situations: “I tell them, when you’re in traffic and you have to stop for a moment at a red light, use the opportunity!”

This year’s subject was “Kinship, Conflict and Compassion”. The capacity for complex high-level cooperation, which has been so essential to the evolutionary success of humans, requires the ability to connect and bond with others. That ability to connect, however, also comes with a tendency to create in-group/out-group distinctions that can be a source of conflict. At a juncture where the politico-social climate seems increasingly favourable to fanning conflict, rather than fostering cooperation, openness and compassion, this subject has particular relevance.

There was of course a strong dose of neuroscience, examining how these phenomena occur, individually, or across cultures, and also ‘messages from the front-line’ with speakers involved in the situation in Bosnia, the experience of immigrant families in Ireland, and the threat to freedom and democracy in an age of populism and social media.

There was an unexpected moment of light relief when Amy Cohen Varela, the late Francisco Varela’s spouse and a founder member of Mind & Life, and Michel Bitbol, a philosopher of science, and specialist of Schrödinger, performed a little play! Amy, wearing a white coat, played the scientist, insisting on the valid evidence of objective experimentation, and Michel, with a symbolic maroon cloth over his knees, played the learned Tibetan lama, pointing out that all experience is first person experience and generally nuancing the notion of objectivity. From time to time he got up and put on a hat to deliver intriguing asides from (mainly Western) philosophers. This light-hearted discussion was in fact a reminder of the essential dialogue of Mind & Life.

Michel has created an Initiative for Contemplative Phenomenology, using philosophy to enrich the debate between these apparently opposing but potentially complementary approaches. Already the old certainties are shaken in quantum physics and in contemplative neuroscience, in spite of ever-advancing discoveries, the limits of what can be measured from the outside are obvious.

It was wonderful to see young researchers in different fields come together to listen and exchange in a very interactive climate, mixing neuroscientists, sociologists, philosophers, and contemplatives... with yoga and meditation every day! In particular it was heartening to see everyone’s commitment to working for a better world, each in his or her own way, in spite of the headwinds. At one point everyone was asked to position themselves as optimistic or pessimistic about the future. The responses covered the entire spectrum. 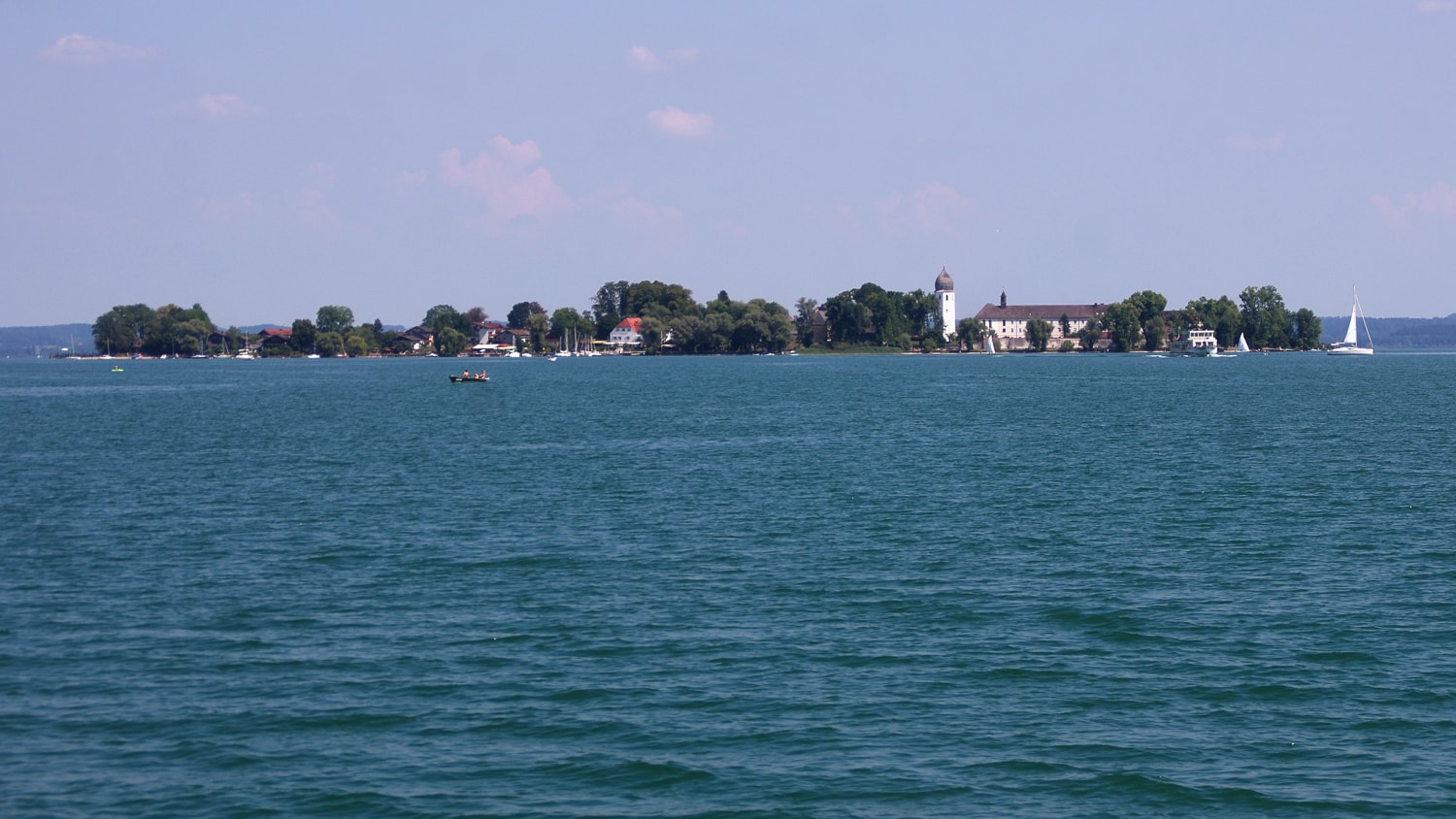 Approaching the Fraueninsel. The island can only be reached by boat. 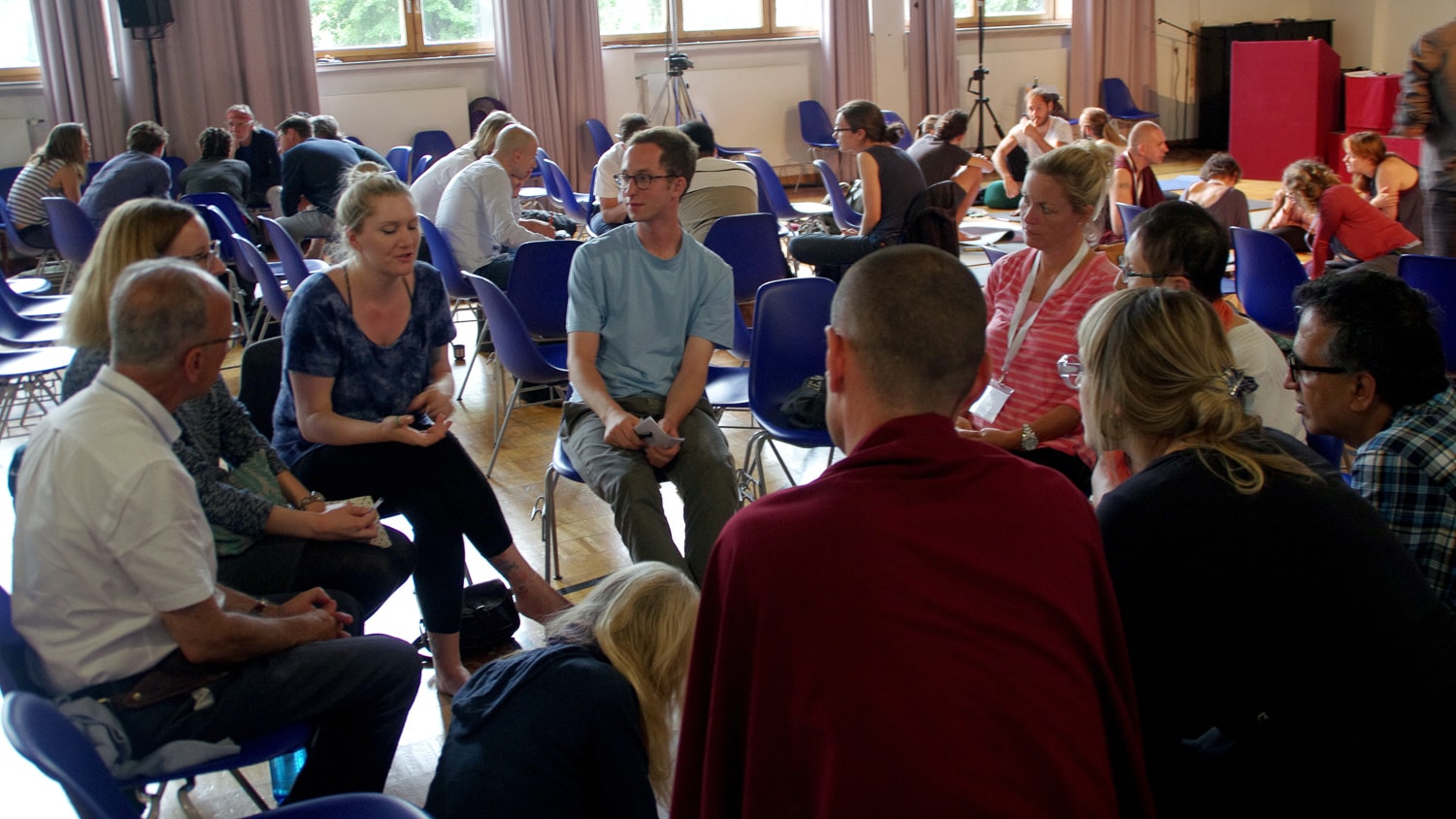 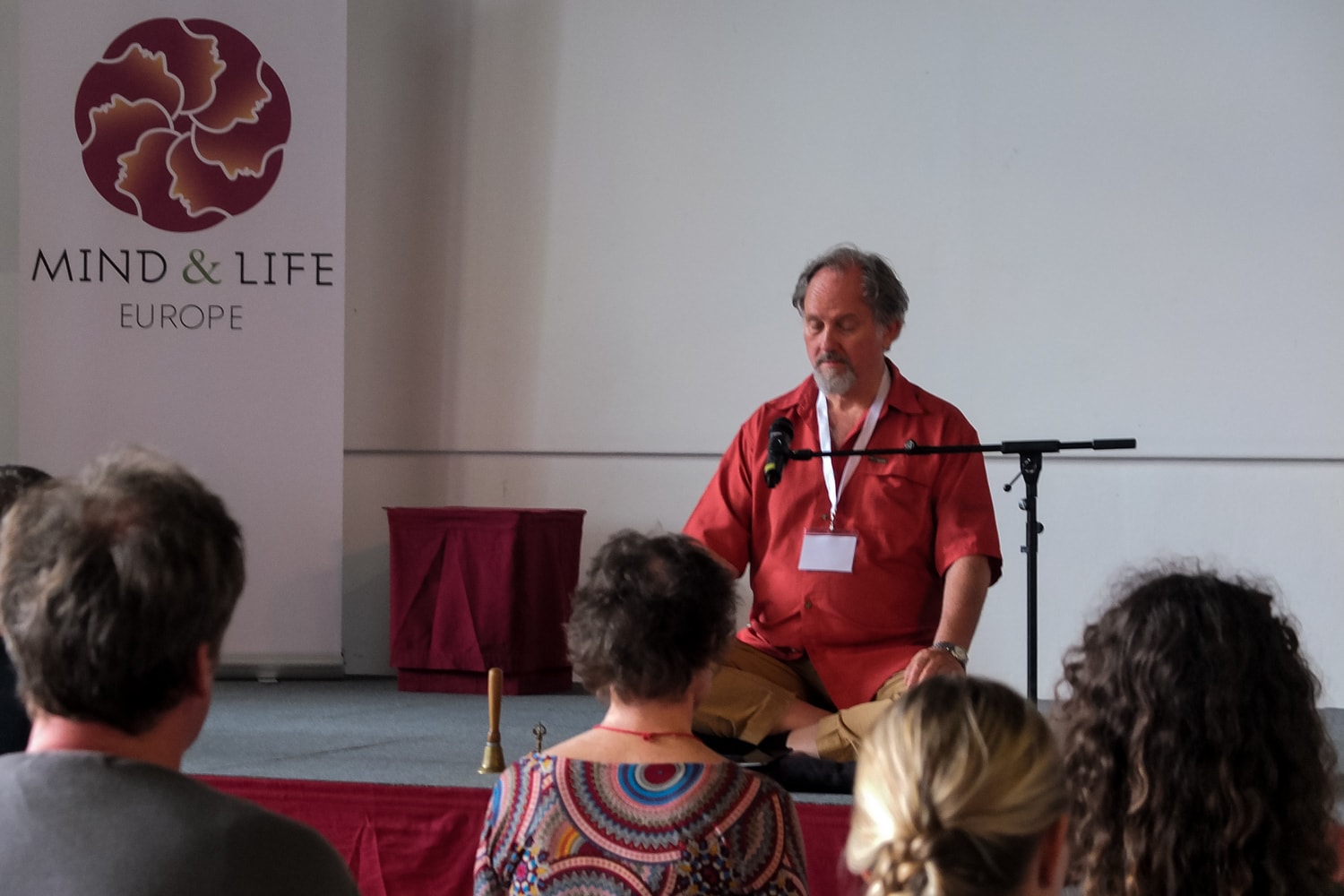 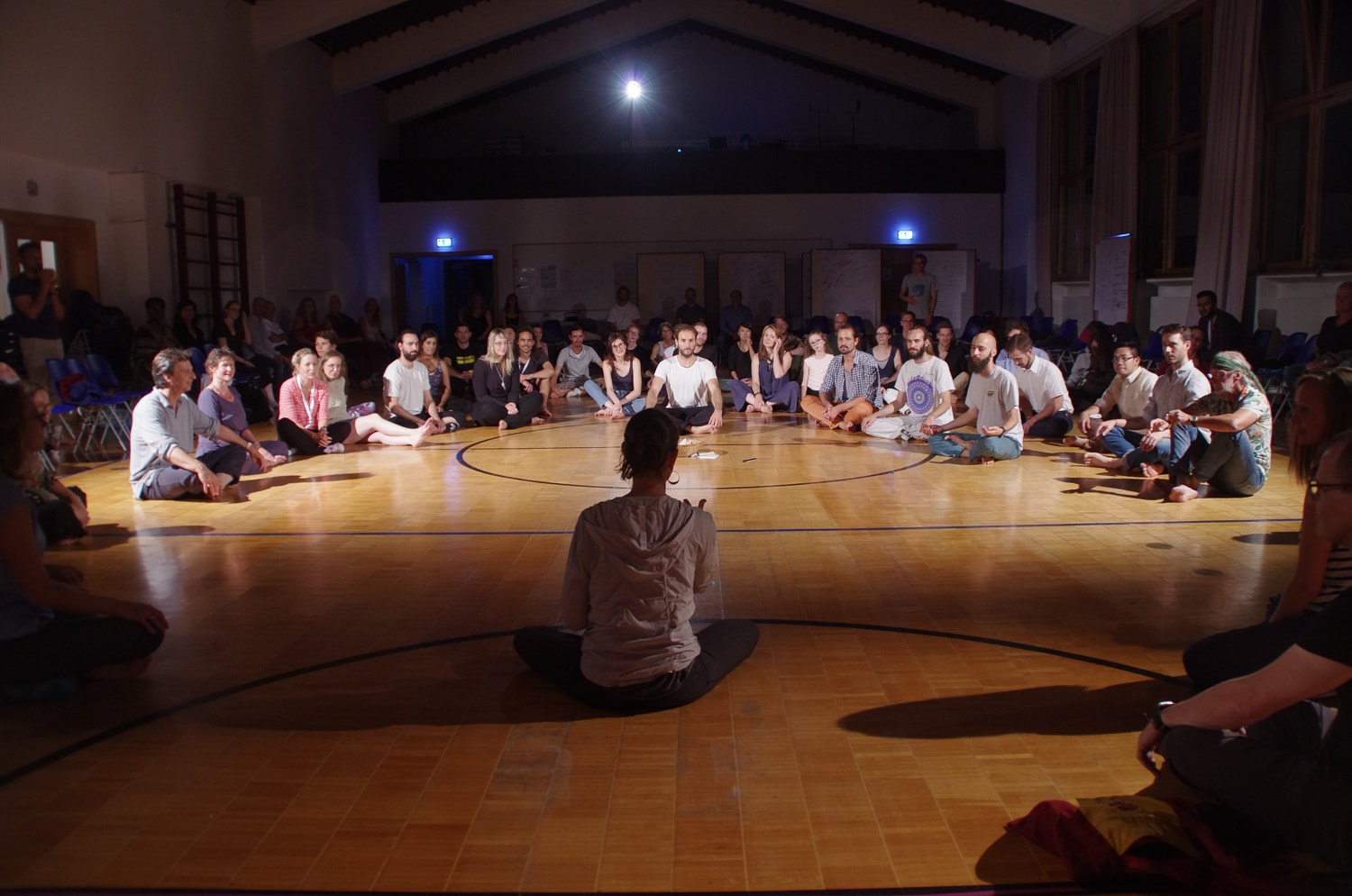 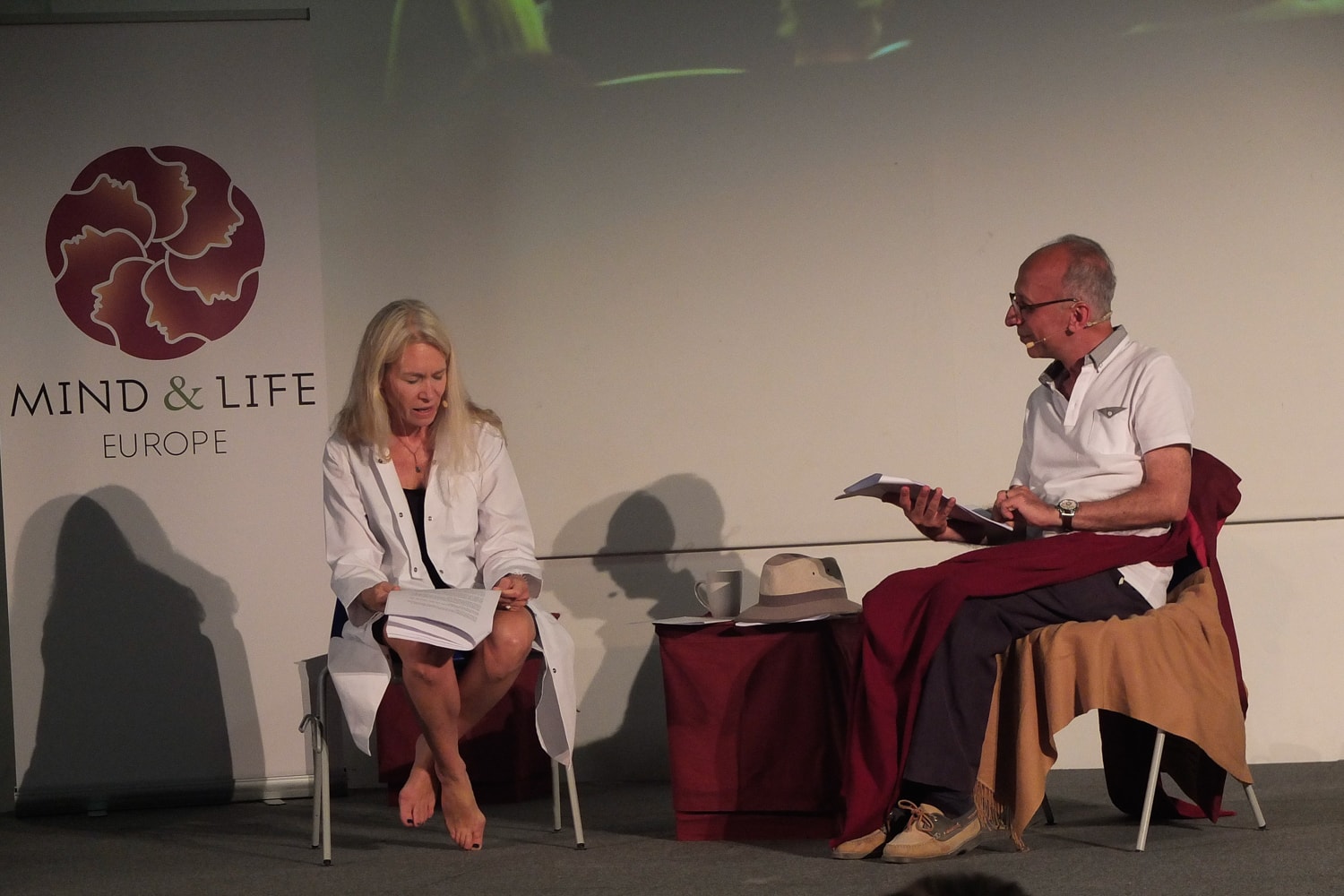 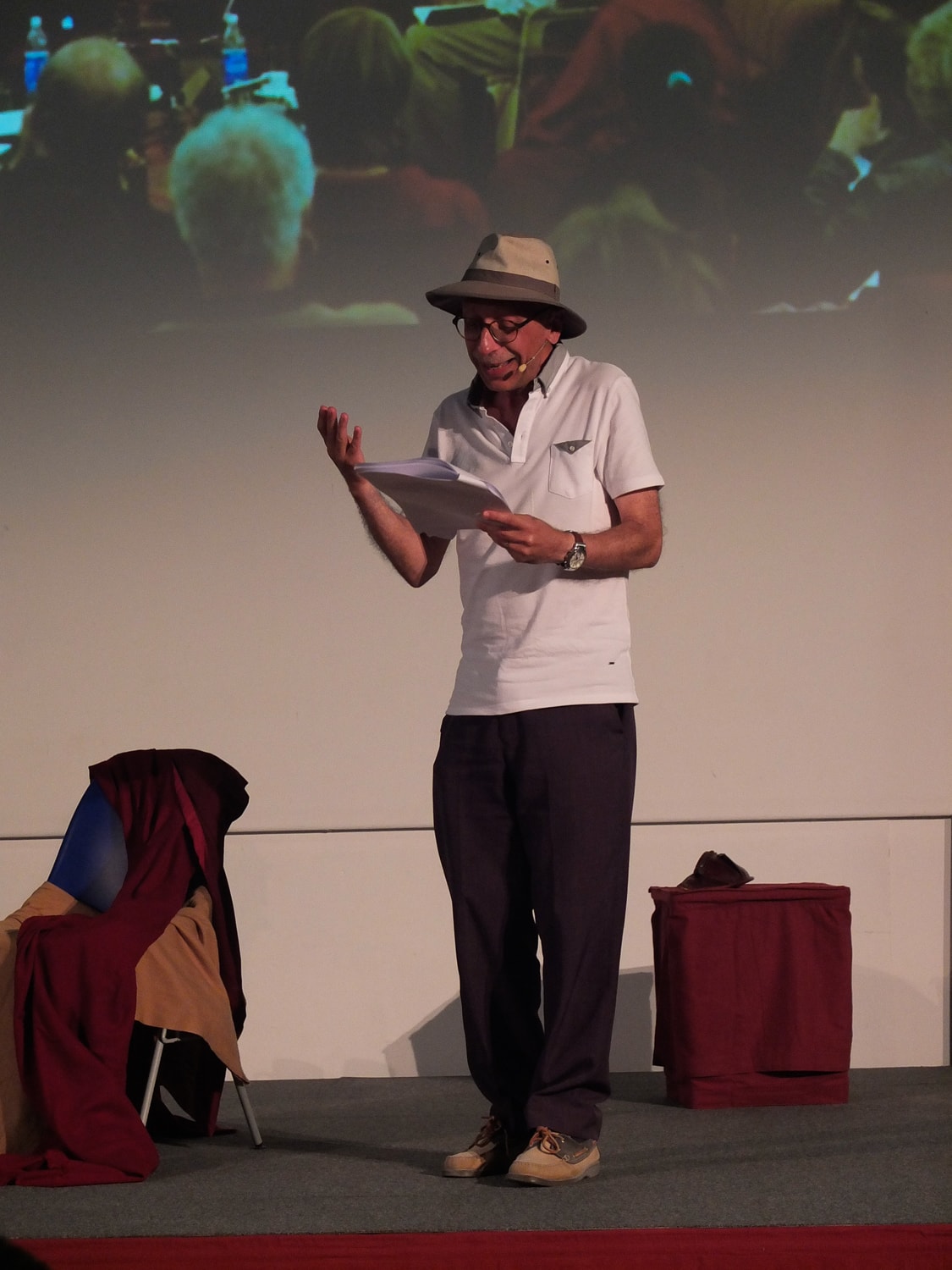 Michel puts his philosopher’s hat on. 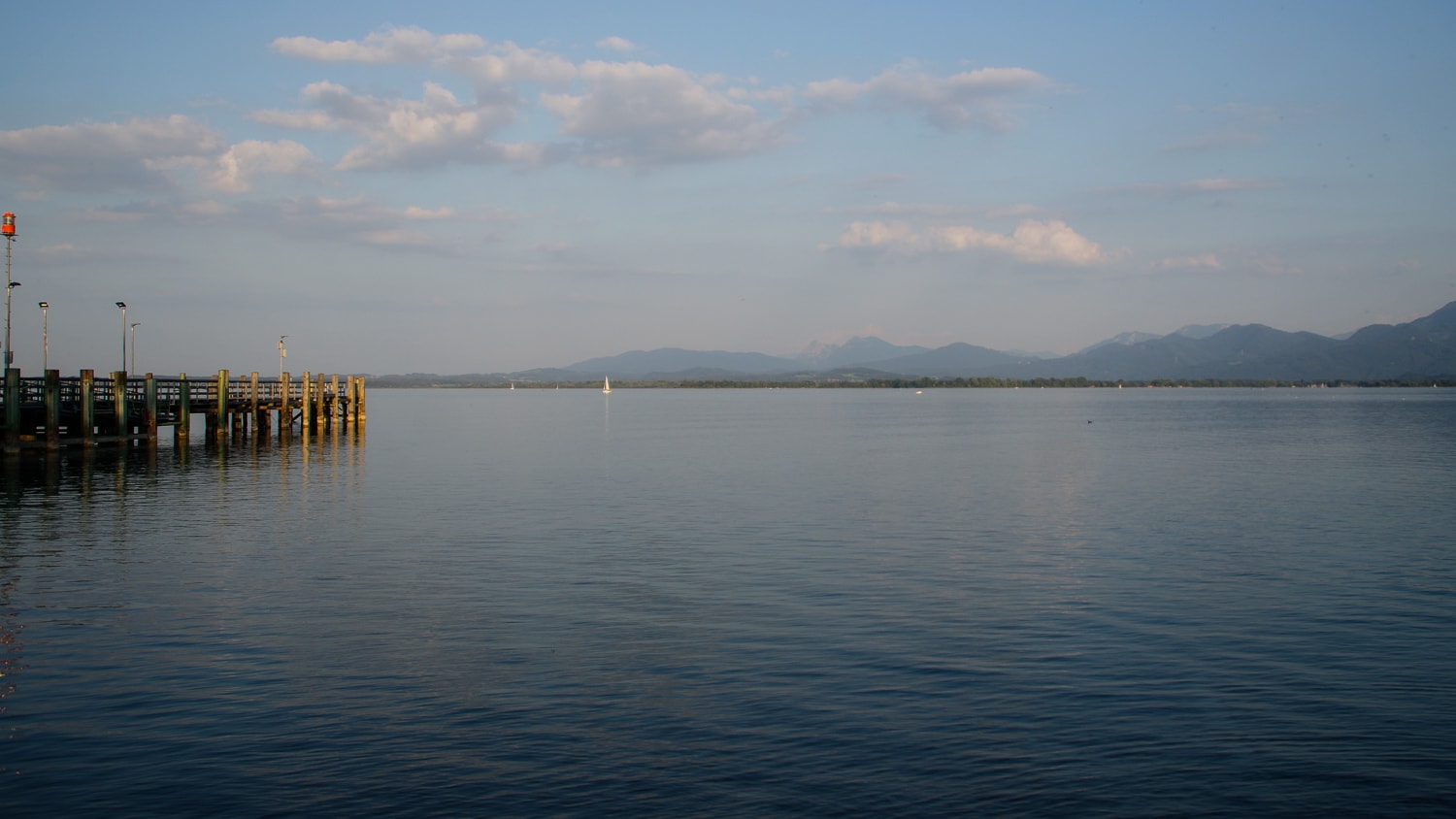 The calm presence of the lake… 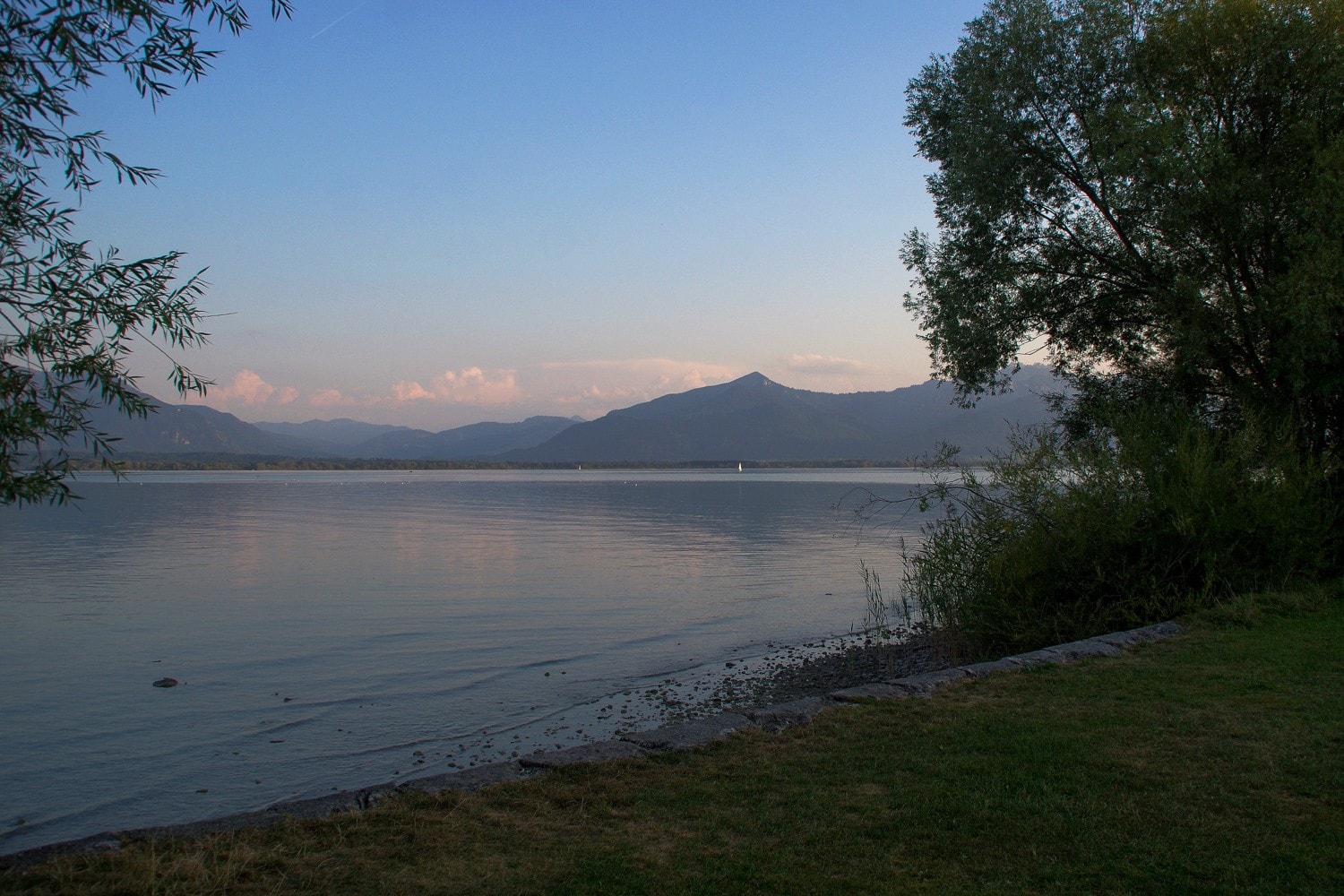 With its constant transformations. 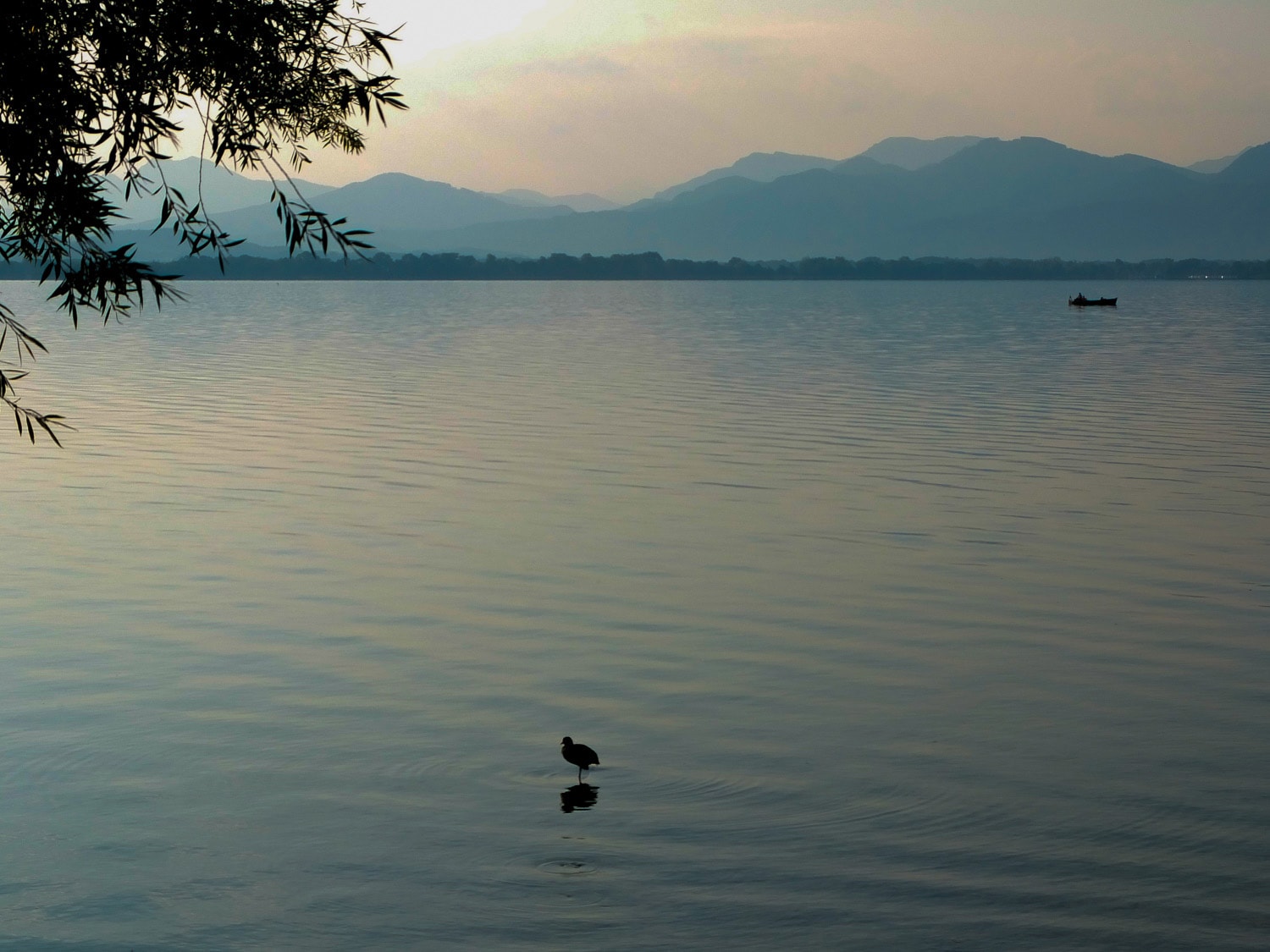 We use cookies and similar technologies to enhance your browsing experience, security, analytics, customisation and personalised advertising. You can learn more in our Privacy Policy.
Accept